This is from my ongoing documentation of public art and design in Mumbai.

I went out to witness the birth of first street art or graffiti in Mumbai and tried to understand its value today. I explored chapel road which is a kind of public art refuge that for some time  makes you admire the location if only for a little bit longer.

The essence of street art lies in evoking emotion and engaging the passersby. It wants to start a conversation with onlookers.It is also used for social commentary. Brazil has some of the world’s most dynamic street art that reflects its culture and socio economic differences and has somewhat changed the city.

Mumbai is not particular big on graffiti which can be understood as using city’s walls as a medium of creativity instead of canvas, but in 2008 India wall project started which took the responsibility of using street art to not only beautify neglected regions but also to reflect our society and its celebration.The wall project was started to infuse new life of creativity in to the public space and I went out to search what happened from then on.

But it all started at a narrow winding Chapel streetin Bandrawas splashed with paint as it came out of neglect and dwelled in to art.Chapel road in Bandra is a narrow winding road between Mt. Carmel Church and Hill road and it houses some of the first street art  you will observe in Mumbai. The street is paved in narrow lines and has many century old buildings. There is a silence and relaxed aura around here. Walls here have been painted by some of the most famous wall artists of all time namely, OsGemeos, the brazillian duo and Shiro who is a Japanese Graffiti Artisit.

The street art in Bandra is mostly in faded state with not much attention to them. Well street art is isn’t always meant to be permanent and may be that is what makes it appear more and leave an impression which can sometimes change the city. 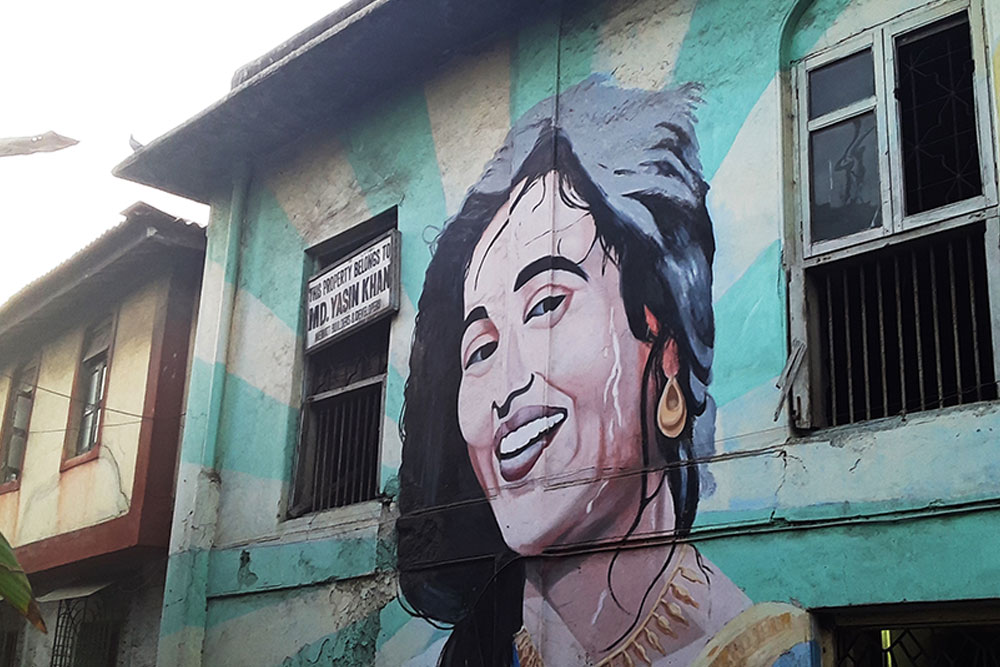 Mumbai loves Bollywood and Madhubala! This giant wall art that takes the entire monolith wall celebrates Bollywood and classical Indian Cinema. Entire wall is about 2 story high is covered in this façade. It’s just can’t be missed and engages the public in awe. Find this at the first corner when you entre Chapel road. 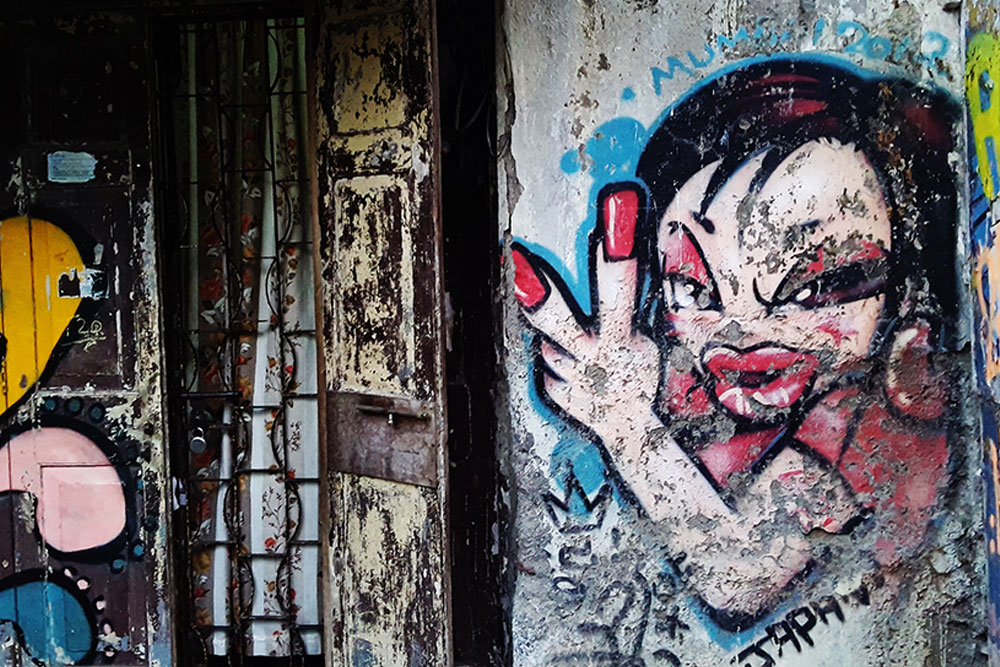 This one is done by famous Japanese artist Shiro sometime in 2008. Sad it’s almost faded. Chipping away paint will consume this art very soon. 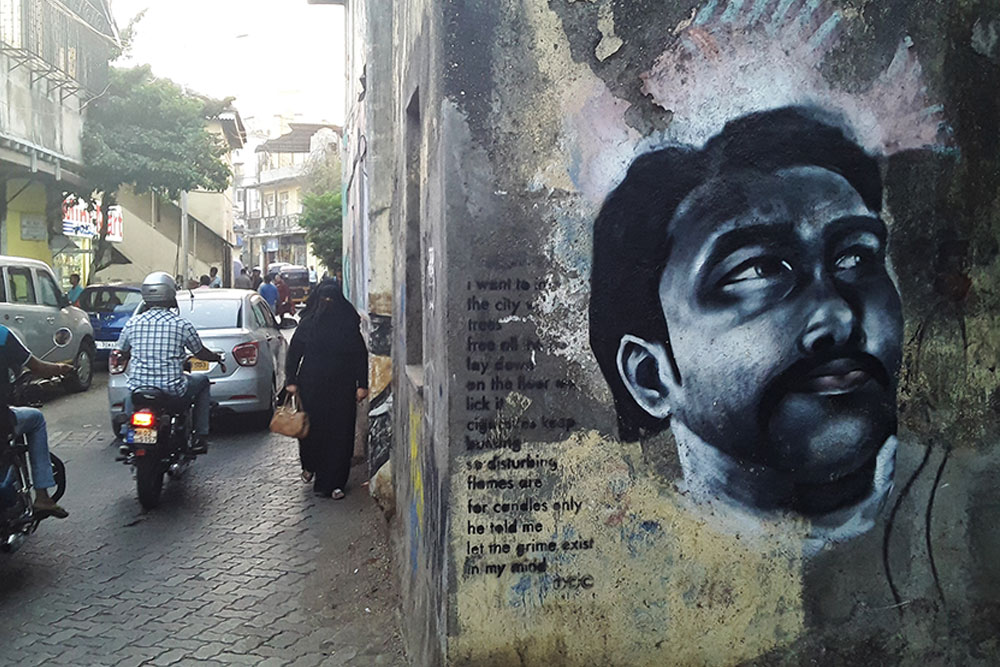 Public art engages us and makes us emote. This one here talks about the thoughts of a mind which makes us stop for a second and interact with it. The thinker? 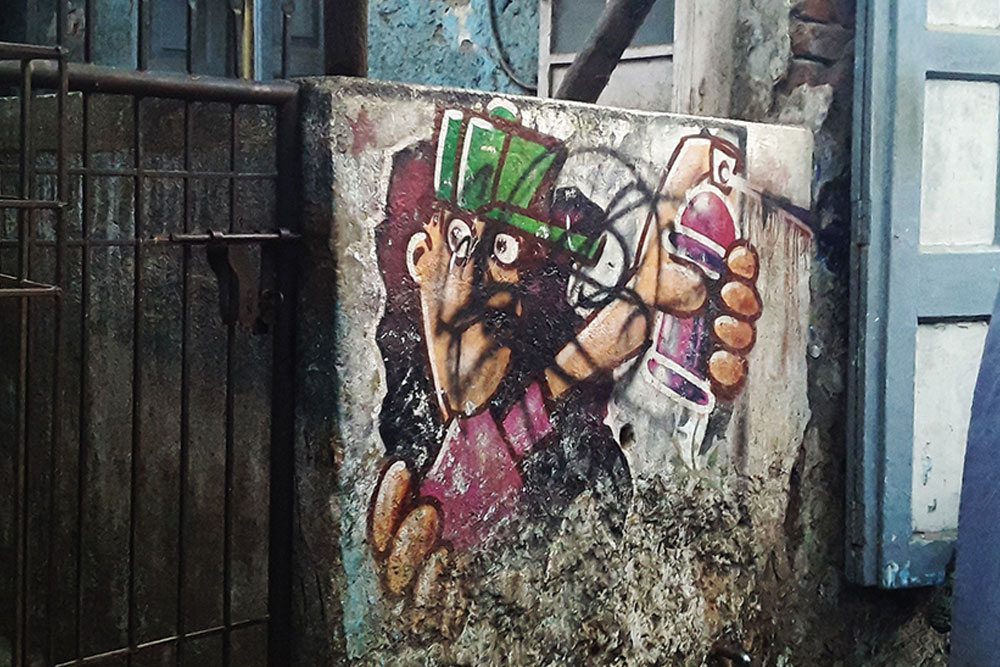 This one makes the wall pop out. I wonder how beautiful it must have beenat the day of completion. 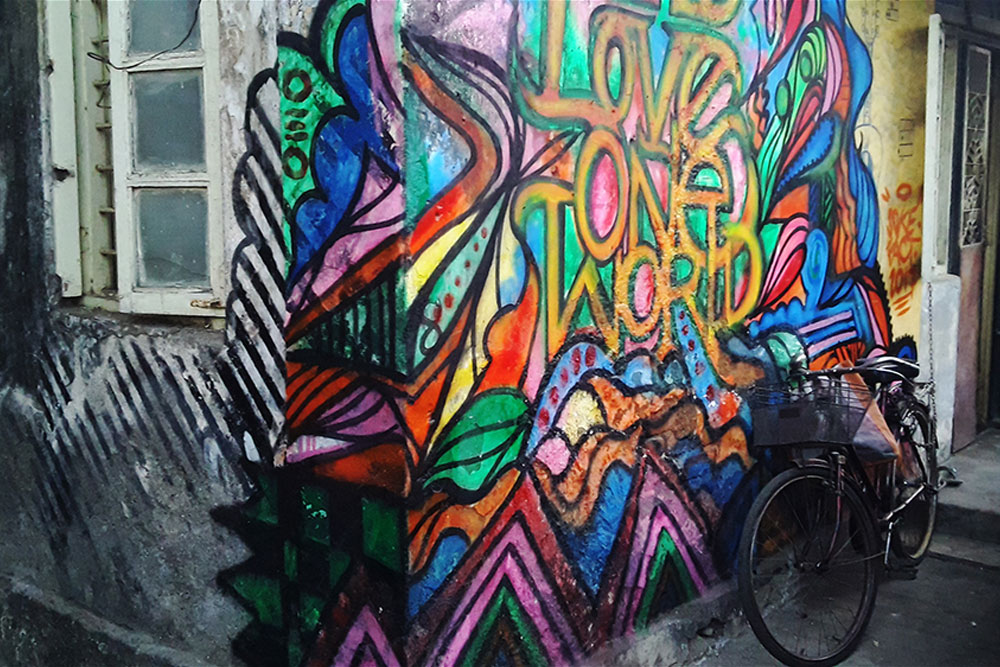 This corner has become an art piece. 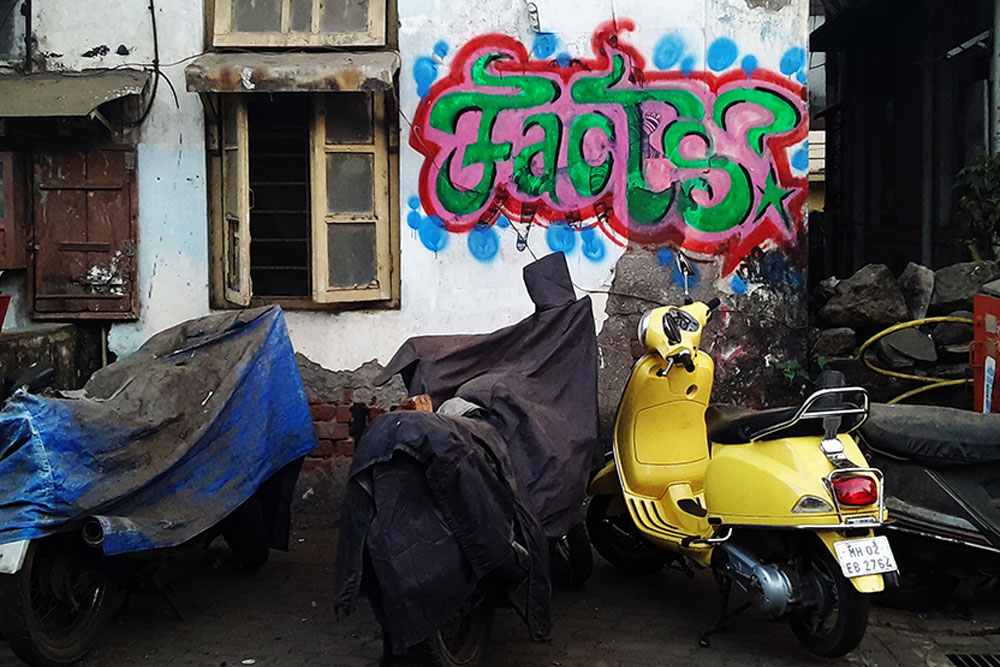 Facts? Another one leaves questions. 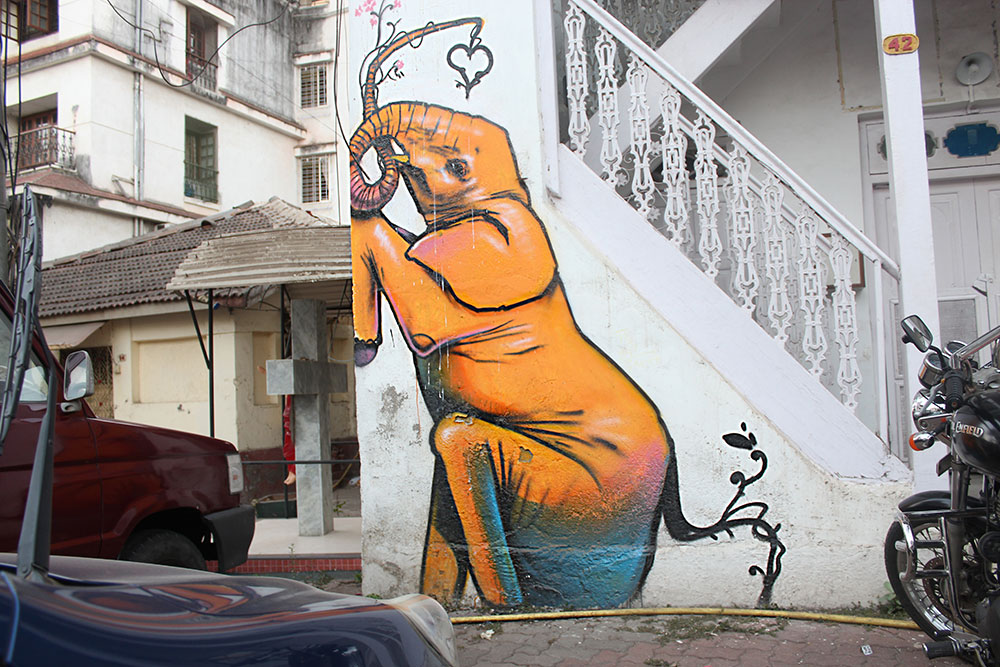 This elephant is life size! Some of the street art is monolith in size and almost covers the wall. 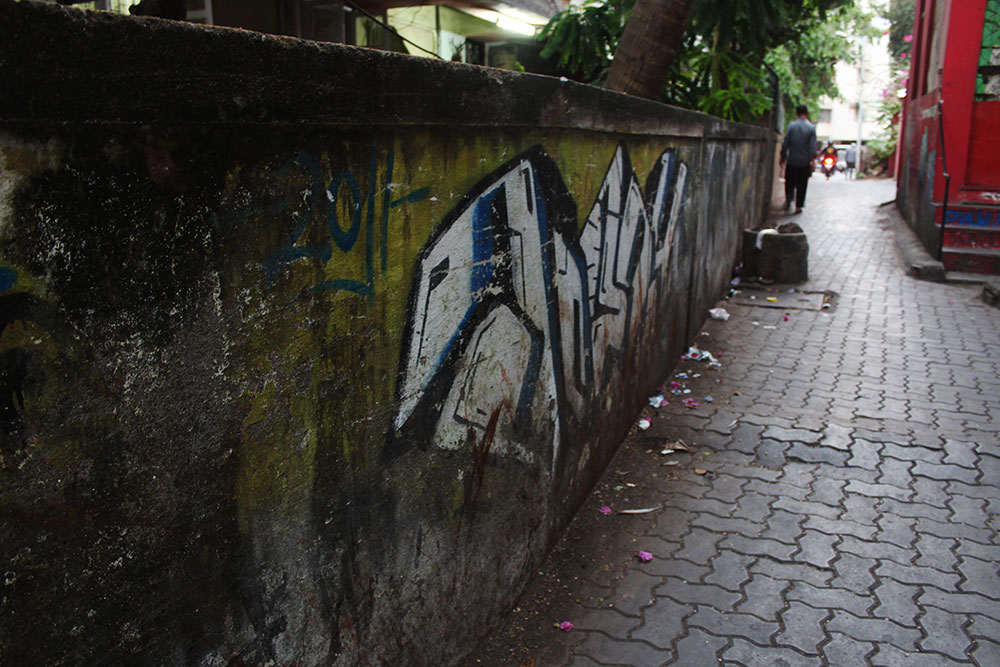 Fading away with time. 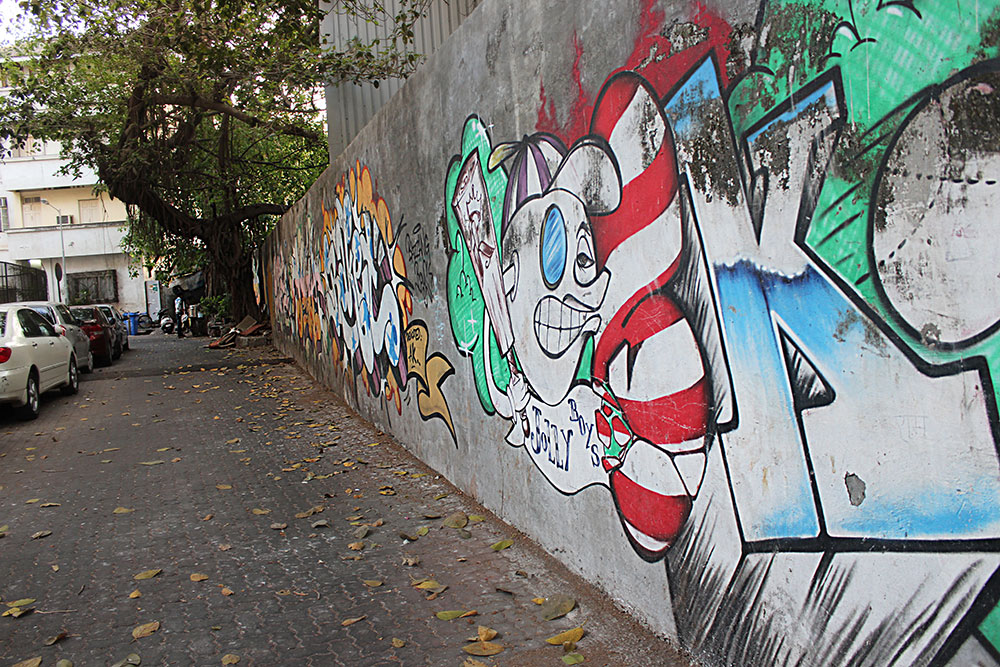 Colaba also houses some tucked away pieces in street corner which tool me hours to pinpoint but the effort was fruitfull. This pieces is nicely tucked away at a street dead end. 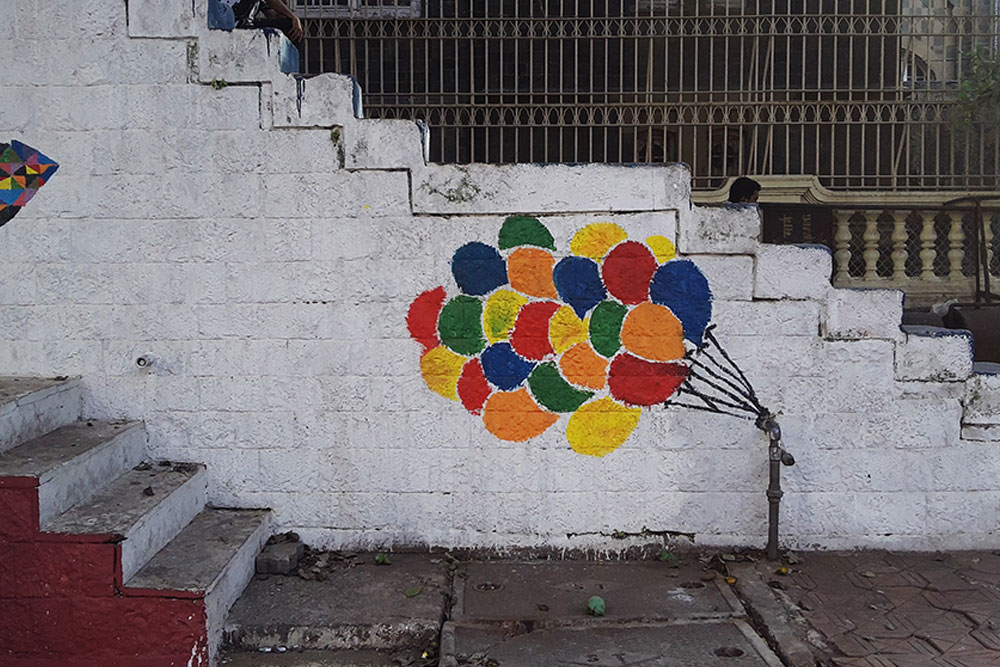 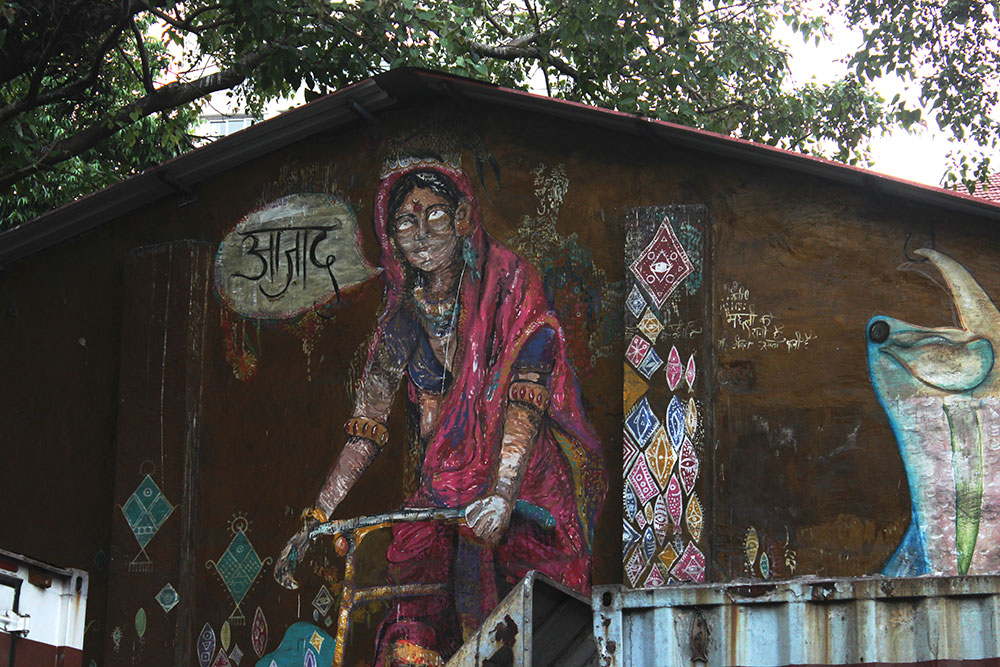 Street art celebrate society. This absolutely huge pieces depicts the free women who makes an income and has freedom and dignity. 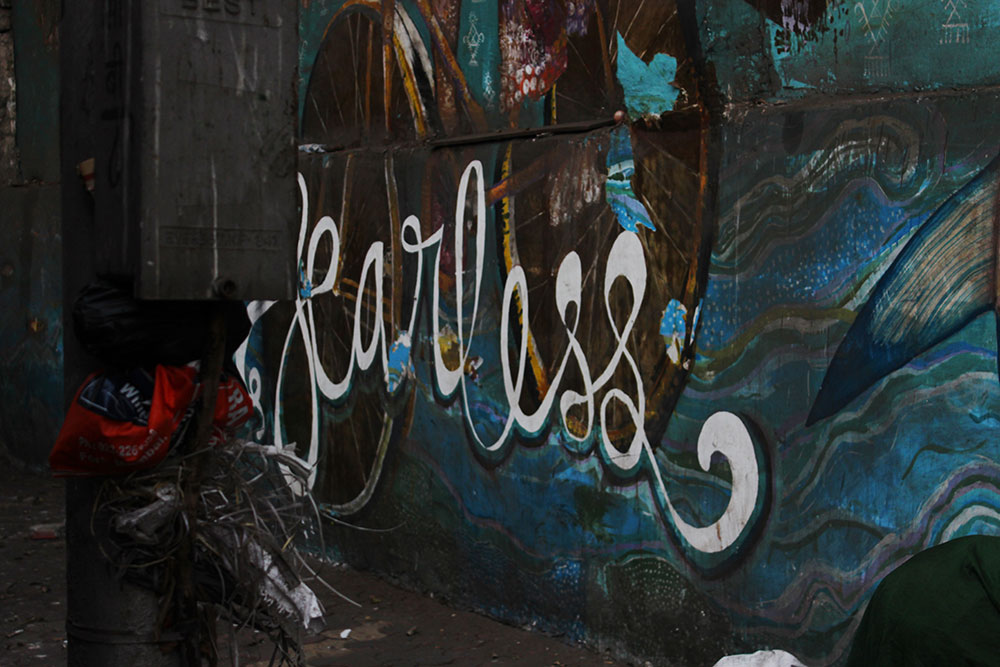