As a kid I have witnessed many parts of this oral tradition through Savamani and Jagrans. I have seen Bhopas perform with different instruments all night in the villages. However, according to some of my family members these performances have changed drastically. In the old times, these Bhopas used to go from village to village and sing these ballads for the people, which is one of the primary sources of passing on these stories to the next generation. In a discussion with my family about why we worship these gods and what their stories are, I came across the oral tradition carried out by the Bhopas. After understanding the context of these stories, it made me realise that these stories are slowly getting lost. As a family who worships these folk deities, we knew very little about them and the stories we knew were summarised versions which only talked about the folk deity and the other characters were lost.

The detailed Phad storytelling by the Bhopas is a rare event in today’s times. Bhopas are very rarely invited by families to perform in Jagrans or Savamanis. In the fast paced world, it is becoming more and more difficult for the audiences to invest the long hours that Phad storytelling requires. Phad storytelling is the main source of income for Bhopas, but the demands of the audiences has made them evolve their style of storytelling. Now, multiple groups of Bhopas are invited to play on a stage in the name of preserving “Hadoti culture”. In this short time duration, only the popular part of the ballad is sung. This popular part of the ballad emphasises a lot on the folk deity, but the secondary characters and their role is not mentioned as done in the detailed version.

As a kid, I have heard some of these stories but only the mainstream versions which are very popular. In my family, people are aware of the folk deity and his role in the story, but in most cases they either do not recall the names of the secondary characters or they get confused among the roles of the secondary characters. This made me interested in knowing more about these secondary characters that are not well known or recognised. To know more I started reading the different versions of the stories. Initially, I started with 3 folk deities and upon reading more and more I found myself interested in Pabuji's story more than the rest as he is cunning in the beginning of the story and his actions are more or less dependent on other characters who take a more active role in the story like Deval and Pabuji's four companions. It seems like Pabuji's miraculous powers were enough for victory and he is not expected to take part in the battle to save the people. But in the case of other deities like Gogaji and Tejaji, they fought most of the battles and displayed valour. Gogaji and Tejaji are portrayed as humans with the Rajputana honour whereas Pabuji appears to have something supernatural about him. As Pabuji was not actively participating in his battles, the secondary characters were active in his place which made their contribution even more crucial to the story. So, I wanted to explore Pabuji’s stories from the perspective of these secondary characters that are equally essential to the plot of the story. 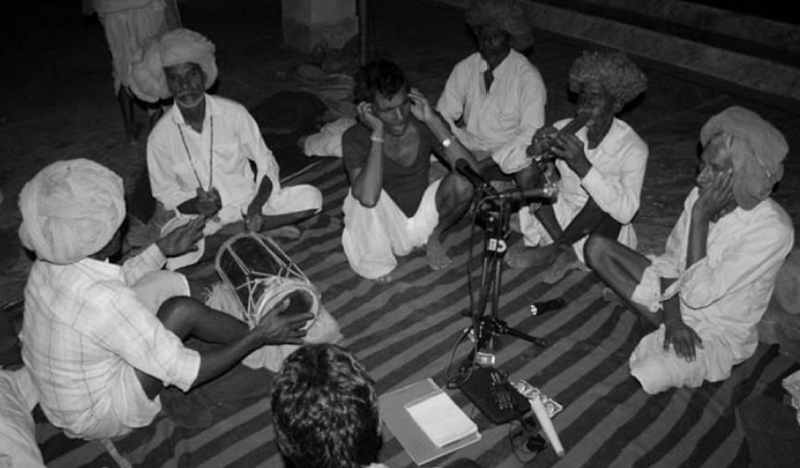 Bhopas singing in a Jagran.