There are close to 6,500 spoken languages in the world, roughly 600 of which are widely known, practised or learned. Each language has a unique culture attached to it, which is invariably expressed in its words. A culture has to allot enough importance to an experience to have a unique word for it, thus making them “untranslatable”.

When one talks about untranslatable words, they can be classified into broadly two types of contexts:

I. Translatable contexts: Concepts and ideas that are easily understood across cultures and geographical locations. These are words that may not have a one-word translation, but can be satisfactorily explained in most languages. They usually pertain to simple human emotions, natural phenomena, universal social norms, etc.

II. Untranslatable contexts: These contexts are more specific to a culture or location that may not even hold any meaning when placed outside of that constraint, becoming very difficult to explain in other languages. Such words usually have a large range of possible meanings that are commonly perceived under multiple headings, or they describe complex, subtle human tendencies, or they are rooted in a specific culture and its norms, which holds no relevance in other contexts.

It is believed that this project will bring together cultural explorations and visibility along with presenting it in the context with etymology and language structure, while being a visually pleasing experience. Storytelling also becomes an important element, so as to holistically portray the complete extent of what every word means. The future scope for exploration includes possibilities like integrating Alternate Reality with print to create an interesting experience. 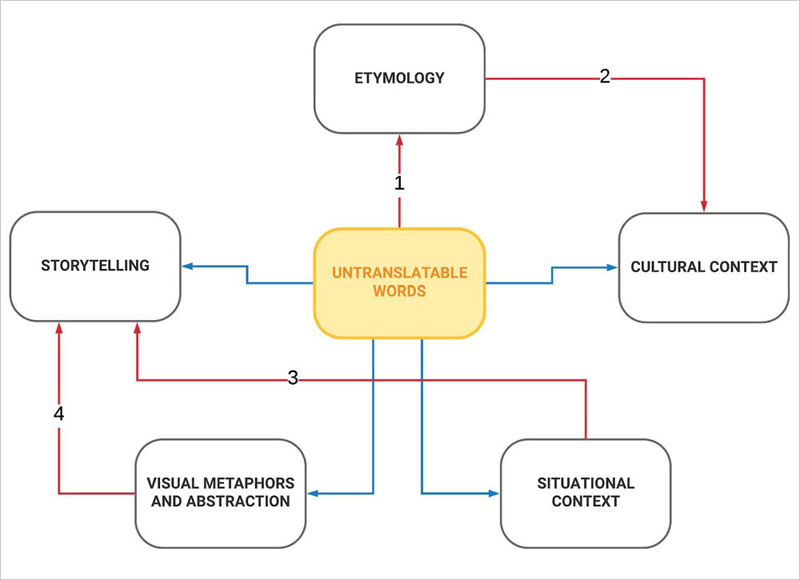 After researching existing projects, it was observed that most of them stop at expressing the literal meaning of the words in question, without attempting to explain the construction, grammar or etymology of the word- information that is crucial to truly understand the context and usage of the word, thus being culturally relevant.

Some relevant gaps noticed were:
a. What historical language roots do the words originate from? How is each word composed?
b. How is etymology relevant in the cultural context of the respective words?
c. How can one employ the situational relevance of certain words in visual storytelling?
d. How can abstract metaphors be used to tell a story about the word?