The Spider and The Fly

Children are most influenced by what they see around them. It is the period in one’s life when thoughts and character are moulded based on exposure. Visual media is one such means to engage and shape these growing minds. This project looks to use the medium of animated storytelling to teach children moral lessons through fascination and engagement. Many contemporary literary works are experimenting with mediums of storytelling to teach children how to be better human beings such as ‘A Day in the Life of Marlon Bundo’ (An illustrated storybook written by John Oliver) that teaches children about LGBTQ rights and ‘Brontorina’ (A picture book by James Howe) a story that teaches kids perseverance to achieve what they want.

This project covers the production of an animated short film that adapts an existing piece of literature, ‘The Spider And The Fly’ (A poem by Mary Howitt), into a thrilling detective tale that teaches children not to be gullible and always be aware of one’s surroundings and interactions. The project begins with pre-production at hand, including the story, script, storyboard, animatic, character design, environment base design, concept art and soundtrack, and spans the production of the first scene of the film. The production stages consist of the detailed animatic, keyframes, in-betweens, lipsync, clean up, colour, compositing and light and shadow. Detailed animatic, keyframes, in-betweens and lip-sync compose the movements in the animation. The animation’s visual look is then finalised in the clean-up, colour, compositing and light and shadow stages. The project concludes with the progress of the production stage of the film. 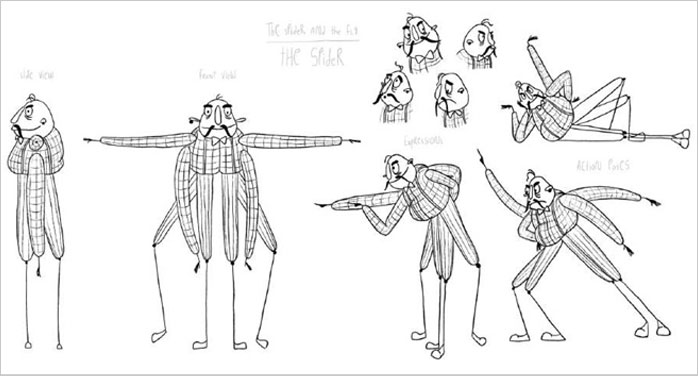