Mapping on a Timeline

2000 - 2500 B.C
“Despite its present-day variety and widespread use, we know little about the origin of the Asian puppet theatre and we can only speculate about the cultural and social circumstances that first occasioned it. Of this much we can be certain: As long as man exists, that long he has fashioned images of himself, be it for purposes of religious worship, that is, as idols, or be it as toys to amuse himself and his children. We have an archeological proof for a number of prehistoric civilizations of terracotta dolls and for some of them we have evidence of dolls with moveable limbs ("mechanical dolls''). For instance, a toy cow with a moveable head was found at the Harappa site of the ancient Indus valley civilization (2500 B.C.)”.

“Small ivory mechanical figurines, thought to be from about 2000 B.C. were found in an Egyptian tomb. Human and animal figures manipulated by strings (marionettes) were found in Thebes and Memphis. The famed monstrous gods of ancient Egypt were moved by concealed mechanisms. During the Middle Kingdom (ca. 2030–1650 BCE), evidence suggests that Egyptians crafted automatons made out of wood. Operated by strings, these puppet prototypes simulated everyday activities, like the act of preparing dough for bread”. 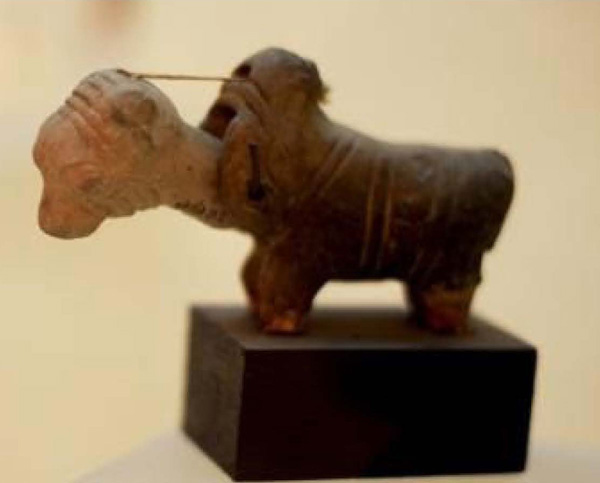 100 - 1300 A.D
“Throughout India, Indonesia, and all of Southeast Asia the traditional repertory of the puppet theatre is still largely religious. It is based on Indian mythological tales and legends, principally, however, on the Mahabharata and the Ramayana. In Indonesia, and the peninsular countries of Southeast Asia, which all share a common stock of Proto-Malay myths and rituals (dating back to 2000 B.C.), folk theatre tied to animistic worship and community rites, such as the rice harvest festivals, did not simply disappear upon the arrival of more developed techniques and repertoires coming from India (from approximately 100 A.D.-1000 A.D.). But, rather, these new forms were altered and acculturated to the existing, indigenous ones. Development from the ritualistic-religious use of puppetry to the secular”. 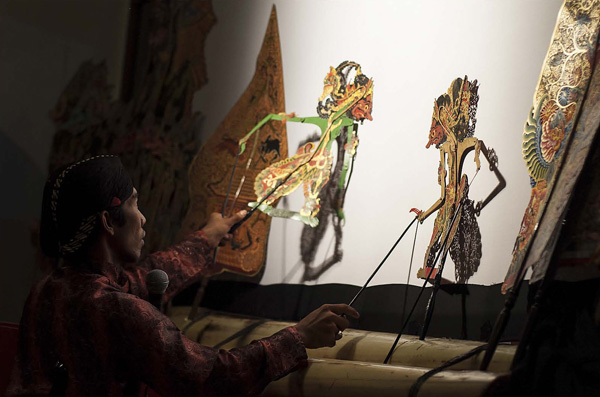 “The development in Asia (as elsewhere) has been from the ritualistic-religious use of puppetry to the secular. Various types of secular repertoires, such as royal genealogies, romances, the heroic epos, and the fairy tales have been added as have also technical improvement (e.g., the 15th century abstract and stylized shape of the Javanese wayang kulit or shadow puppets is due to Islamic influence). From approximately 1300 A.D. onward the Javanese wayang kulit cyclic puppet repertoire developed a number of subtypes with largely secularized repertoires and some of them with dolls. From among all of these only the wayang kulit (or wayang purwo) with its repertoire from Mahabharata and Ramayana remained popular throughout Southeast Asia. Wayang golek is popular in south-central Java, the others having largely remained court productions. Other forms have developed recently from the Wayang tradition, for instance, the wayang suluh of the guerillas or freedom fighters. Outside the Indonesian Wayang, tradition stands the 20th century imported Do-the-hi. Chinese-clad glove puppets perform from Chinese folktale repertoires for the Chinese Buddhist communities on Java”.

1900 - 1950
Whatever might be their political role in ancient times, it's now only in the last few decades that the puppet theatre has been mobilized systematically in the war of propaganda by several Asian governments.

“Puppets also played their part in the Indonesian independence struggle. They were not so used in India where the British colonial master allowed ample freedom of expression, unlike the Dutch rulers of Indonesia, who strictly controlled the radio, press, and cinema during the years of the Revolution from 1945 to 1949. While the Dutch controlled the cities, student-guerillas slipped out to the villages with short puppet plays about the exploits of their nationalist leaders and guerillas in the fight for independence. This new puppet theatre was known as the wayang suluh (the torch or information puppet theatre). The Dutch went out of their way to search and destroy several hundred of these puppets.

In addition to its efforts to preserve and improve existing forms of the puppet theatre, the Government of India and several of its state governments after the model of communist state use of the puppet theatre-are producing and distributing plays and skits in order to promote village development schemes." However, India being a free country, it is possible to mind her words of caution about the dangers inherent in government manipulation of folk art”.