In India, there are twenty living traditions of shadow puppetry, string puppetry, rod puppetry, and glove puppetry. But they all share some similarities with each other even when they belong from different regions and are performed in different languages and dialects. The similarity includes the context of stories for the play, the central figure of the narrator or singer, dance, music, and the structure of the performance. The social and economical context of traditional artists, visuals, and aesthetics somehow are also shared within the realm of theaters. Their worldview along with the moral content is linked with the religion, and these religions could include cults of local divinity such as Hindu Shaivism, Buddhism, Jainism, Vaishnavism, and Islam.

There are strong connections between the Indian puppetry genre from different regions and traditional actor theater forms. The ritual of preparations is very much similar. Sutradhar (the one who holds the string) and Vidushaka (a comic relief) appear taking different forms and names on the opening of the show. The interplay between rasa (sentiment) and bhava (emotional state) along with song, text, rhythm, and movement are elements that connect it with the Sanskrit theater strongly. There are scholars who believe that the foundation of regional forms in the local language is very much linked with the Sanskrit drama. Although traditional puppeteers don't share the aesthetic terms used in Natyasastra (‘Book of Drama'' written between 200 B.C.E - 200 C.E).

There are many parallels between puppetry and traditional dance- drama. Karnataka’s yakshagana and yakshagana gombeyata string puppetry, Kerala’s kathakali and pavakathakali glove puppetry, West Bengal’s jatra and danger putul nach rod puppetry, and Assam’s bhaona and putala nach string puppets are interrelated. There are similarities in the visual style also, may it be the costumes, headgear, jewelry, make-up, even sometimes character-type also matches. These similarities make the puppet play look like a miniature theater performance. Since the rhythm and dance are essentially permanent elements in both. The puppeteers wearing ankle bells dance backstage while their puppets dance on the stage along with drummers and musicians beating their bols (drum syllables), matching the puppeteer’s steps.

“Puppet making is routinely related to the visual art tradition of the region. Consider similarities in the treatment of eyes in 16th-century Lepakshi temple murals of Andhra Pradesh and the shadow puppets of the region, the patachitras (iconic paintings on walls, cloth, palm leaves, scrolls) and gopalila kundhei puppets of Orissa, and the patas (paintings, painted scrolls) and danger putul nach rod puppets of West Bengal. References to these picture scrolls can be found from the 2nd century BCE and, for example, a 3rd-century text Bhagavati Sutra relates that the great Jain teacher Mankhali Gosala was the son of a picture showman. Buddhist literature mentions charana chitta (mobile paintings) of the punishments of hell, commonly called yama pata (scrolls of the god Yama, ruler of the underworld): even today we find Bengali performers who play hell scenes called yam pot, and contemporary Gujarati panels may show the Lord of Death (Yama) dealing out punishments. These picture narratives are performed with music and movement that reminds us that puppetry and performers and painters often come from the same groups as puppeteers”. 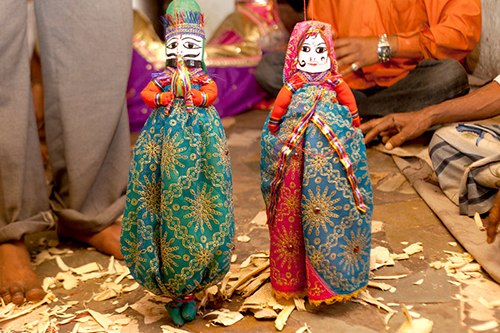