"Dots, spots, dashes, arcs, lines, smudges, smears, stains: groping, searching, floundering to arrive at some form of truth or other... . Attempting to utter a statement: sometimes coherent, sometimes not. And the utterance could stretch to a cry, a wail, a moan". These words by Mickey Patel best express the character of his drawings, cartoons and caricature, also seem to chart the 'critical path' of his personality. Mickey Patel passed away on August 17th, 1994. His works have inspired many, and his contributions unforgettable. Dr. Ajanta Sen profiles the Master. 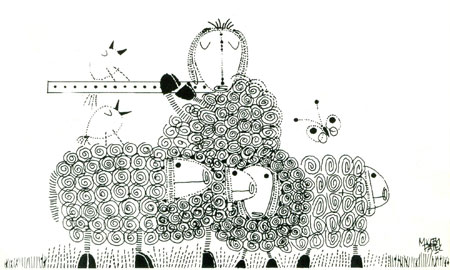 • He worked with the following advertising firms — Lintas, Thompson, ASP, and Clarion.

• He worked for leading newspapers and magazines such as India Today, Reader's Digest, Business
Standard, Hindustan Times, Illustrated Weekly of India, Shankar's Weekly, and the Patriot.

• He illustrated many books for the National Book Trust in Delhi.