The Tale of Toola and Teja

The Assamese nation comprises of several sub-nationalities, and each of these sub-nationalities brought with them various forms of folklore which are collectively known as the Assamese Folklore. However these folklores are not only used for amusement, they teach us morals and introduce us to the rich cultural heritage of Assam.

However, the art of storytelling comes with metamorphosis in its nature to indulge today’s readers, keeping in mind their expectations and the current social structure. Thus the objective of this project is to adapt a traditional folktale and visually represent it in a manner which would appropriately cater to a certain group of audience.

First, one folktale was selected considering the characters and the scope of exploration. Second, in order to retell the story, narrative structures were studied and two of them were selected based on which the adaptation was written. Third, characters were designed and art forms were explored. Fourth, the layout was defined and multiple iterations of storyboards were made which would lead the way into making the final illustrated book.

The result of this project would be a graphic novel based on a folktale called ‘The Tale of Toola and Teja’ which has been taken from a book named ‘Oral Tradition and Folk Heritage of Northeast India’ by Lalit Kumar Barua. Thus this meaningful adaptation of an Assamese folktale will not only interest a young reader in present times but also give him or her a glimpse of the traditional beliefs of Assam in earlier times.

The Tale of Toola and Teja is a story of two stepsisters, Toola and Teja, who live in the mysterious lands of Assam. Through a string of unfortunate and magical events, they find themselves in a dangerous situation. Teja is faced is with her evil stepmother, Kuheli, while Toola makes a grave sacrifice. The final confrontation decides their fate. 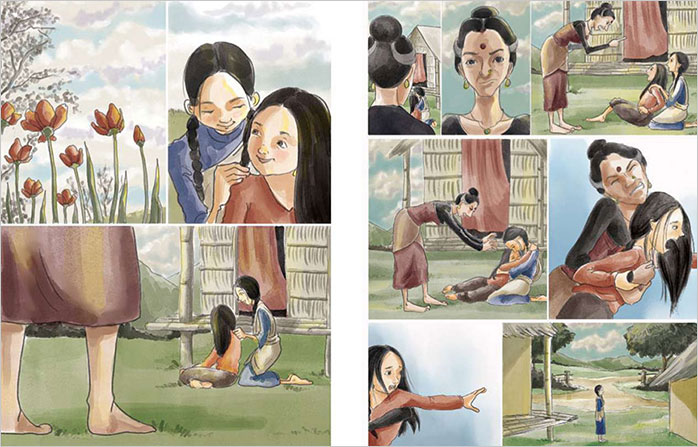