DIY (Do it yourself) material exploration was done in order to check the behaviors and properties of different materials that suggest different types of structure, surface, and connections. As efforts are made to dispose of plastic waste through recycling or reusing. However, the end product of plastic recycling is still plastic. As we all know, we cannot replace plastic with other materials, so researchers are developing bioplastics which are environmentally friendly. Based on already done experiments from various sites and YouTube videos, the following experiments were performed. To begin, I followed the bioplastic recipe exactly as described in the video to see how it worked.

Bioplastics are the plastics which fall into this definition and exist on a spectrum ranging from fossil-fuel and biologically based plastics that are biodegradable to biologically based plastics that are not biodegradable (Material designers, 2020). A term used to describe a group of alternative plastics is bioplastics. Over the last 20 years, many low-cost bioplastic alternatives have been developed and used in common household items like food packaging, disposable tableware, and compostable bags.

Table 3 Recipe and observation of Experiment 3.

Lal Gondh was kept in water for two days before being used in the above recipe to test its water absorbability; due to its reddish-brown color, it left a trace of its color in the water, turning it red. Lal Gondh did not dissolve in the water and remained as strong as before. Due to the nature of Lal Gondh, no water was used in the above recipe. Since Lal Gondh is very hard and solid in its natural state, it was powdered and then mixed with other materials. Using the same bioplastic formula, the effect of lactic oxide on the final material was investigated. The Lal Gondh powder and corn starch blended well, and the viscous properties of glycerin and castor kept the materials together, forming a paste. The final material was a powdery paste-like substance with visible pores that were easily broken. Even in powdered form, Lal Gondh has very few, if any, binding properties. It is difficult to bind and has a high melting point.

Following the lessons learned from the previous experiments, it is clear that Lal Gondh has a high melting point and that the end product made from it is powdery, reducing its strength. When cornstarch is cooked in water, it expands and bursts, making it water-soluble. Cornstarch cannot become viscous without hot water, resulting in lumps in the material.

When the hoop was mixed with Lal Gondh and Dhoop, the substance grew stronger than in previous experiments. The material was light, had a smooth finish, and had a little elasticity to it. Since Dhoop has a low melting point, it melted quickly over a medium flame and mixed well with the rest of the ingredients.

Fibers of different lengths were mixed with the binder resin in different orientations in the experiments above, and the results were reported. The water color changed after small chunks of Lal Gondh were soaked in water for almost ten days, and the chunks were jelly, like squishy balls. After that, the cornstarch was mixed with water and Lal Gondh. The ingredients were simple to combine, yielding a viscous bioplastic with lumps of Lal Gondh. Even after soaking it for ten days, Lal Gondh was difficult to mix with water, making water absorption difficult. PLA granules are a thermoplastic material so it becomes soft and malleable at 120-140 °C when heated and take the place of the mold when cooled. Dhoop was mixed with PLA and heated till they mixed well and became a soft, malleable paste. It took time for both of them to mix. Then the long fibers were mixed well with the binder paste. The end material was slightly brittle but had good bending strength. Because of the PLA, the material was translucent and had a brown color.

Castor oil is applied to the inner surface of the cooking vessel, after which 1 tablespoon of guggul gum or dhoop powder is added to the vessel. The vessel is then heated and the poured powder is stirred until it starts to melt. The mixture turns into liquid form and also produces a pleasant aroma, in this part of the process, 1 teaspoon of glycerin and 1 teaspoon of castor oil are added to the mixture. After a few minutes, 1 tablespoon of ground fiber obtained from the palm leave sheath is added and the mixture is constantly stirred until it turns into a uniform paste-like composite solution. The solution is then poured onto a wooden cuboid mold for the solution to take its shape, after which a flat wooden block is used to press the solution in order to make it compressed and compact. The composite is then allowed to cool down, which makes it harder, and, finally, the solid composite is removed from the mold. The more the pressure is added while pressing the composite, the more it gets compact, leaving little to no hollow pores, as these pores may limit the strength of the composite material.

The procedure is first done with the use of fiber strands that are long and staged in layers on top of another in a crisscross manner and then cast onto a slab-shaped mold of 1cm in thickness. Upon observation, the composite material seems strong but when slight pressure is applied, breaking sounds can be heard. This is caused by the brittleness of the material due to the presence of uneven hollow areas that were visible upon inspecting the cross-section of the material when it was cut using a bandsaw. The Dhoop solution, which acts as a binding material, could not penetrate between the layers of the fiber strands.

The same procedure is done, this time with fine ground fibers and cast into a cubical mold of 1 inch by 1 inch. The resultant material is found to show great strength and resistance to breaking.

The final composite material was named DHOLM because of its natural materials like Dhoop and Royal palm fibers. DHOLM is short for ‘DHO’ from Dhoop and ‘LM’ from Palm. 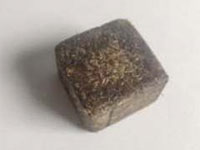