All of the products in our homes, schools, and workplaces are made of one type of material or another. Unless the object you're looking at is naturally occurring, such as a tree or a flower, someone had to decide what material to use to create it. Those people are likely to make their decision based on some aspect of materials science. Materials science is a branch of engineering that entails the research and development of new materials as well as the analysis of their properties and structures. This data can then be used to inform design decisions. We can also apply our knowledge to dismantle materials and reassemble them in novel ways (Materials Science, 2016). A material study was carried out to better understand the functionality and be more environmentally conscious.

Vinegar is a clear solution that contains 4–7 percent acetic acid and 93–96 % water. Vinegar's scientific name is acetic acid. Vinegar is a colorless liquid with a sour taste, low viscosity, and a strong, pungent odor (Hill, 2018). It has a density of 1.05 g/mL and melting and boiling points of 16.7 and 118 degrees Celsius, respectively. When heated, vinegar decomposes (Vinegar, 2021). 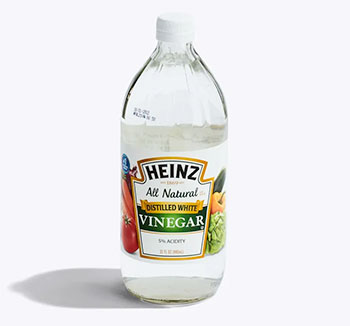 Glycerol is a colorless, odorless, and sweet viscous liquid formed by chemically combining water and fat, which is typically derived from vegetable oil. The boiling point is 290 degrees Celsius; the melting point is 17.9 degrees Celsius, and the relative density is 1.2613. Glycerol can absorb water. It is not dangerous. It is flammable, but it may take some effort to light. Lubricants, plasticizers, adhesives, types of antifreeze, resins, and insulating foams all contain glycerol (Glycerol | 56–81-5., 2017). 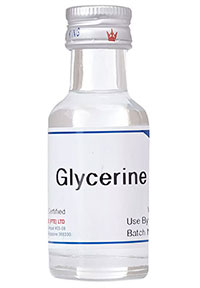 Cornstarch, also known as corn flour, is a gluten-free, fine powdery starch made from corn. Corn flour consists of 25% amylose and 75% amylopectin. The boiling point and melting point of cornstarch are 205 °C and 256 – 258 °C. Cornstarch has a density of 1.5 g/cm³. It is insoluble in water and alcohol. But when heated, cornstarch becomes soluble in water. It is one of the main ingredients of bioplastics. The starch becomes a paste as it heats up, and the viscosity increases as well. It is non-toxic, biologically absorbable, and carbon dioxide is semi-permeable. Cornstarch, which is transparent rather than opaque, is generally used as a thickening agent in gravy and sauce recipes (Physical Properties, 2018). 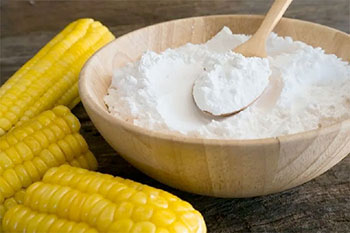 Castor oil is a vegetable oil made from the seeds of the castor bean. Castor oil is a pale-yellow or nearly colorless viscous liquid with a faint mild odor and nauseating taste. 0.95 g/cm3 density Castor oil is stable and does not go rancid unless exposed to high temperatures. Water and organic solvents do not dissolve them. Castor oil had higher viscosity, density, thermal conductivity, and pour point values than a standard lubricant, with a boiling point of 313°C (Castor oil, 2007). 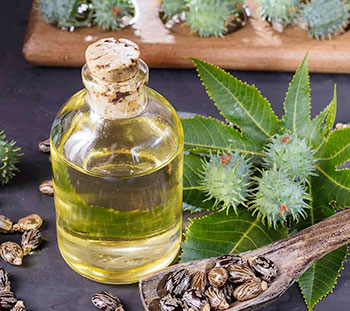 Polylactic acid (PLA) is a versatile commercial biodegradable thermoplastic based on lactic acid. PLA is derived from renewable sources such as sugar cane or corn starch, with a melting temperature ranging from 130 to 180 °C. PLA is a shear-thinning material, which means that its viscosity decreases as stress are applied. PLA is a thermoplastic with a high modulus and good appearance. It has high stiffness and strength at room temperature, comparable to polystyrene (PS). In ambient temperatures, the degradation rate is very slow. PLA is used to make shopping bags, clear cups, 3-D printing material, and other items (S, 2021). 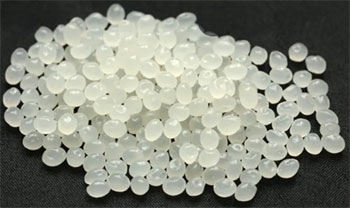 Natural Resin secretion can be found in specialized cavities or in a wide range of plant species. They are formed in passages ducts, which are specialized structures. Resins ooze or exude from the tree's bark and harden when exposed to the air. All-natural resins are plant-based, with the exception of lac, which is produced by the lac insect (Kerria lacca). Resins have the following properties:

• They are not soluble in water.
• They are soluble in common solvents such as alcohol, ether, and turpentine.
• They are transparent or semi-transparent, brittle, and amorphous.
• They have a distinctive lustre, are normally fusible, and when ignited, produce a smoky flame.

Natural Gum is a group of plant products that are formed primarily as a result of plant cellulose disintegration. Gummosis is the term for this process. Gums are produced by a wide range of plant families, but commercial exploitation is limited to the Leguminosae, Sterculiaceae, and Combretaceae families. The majority of gums come from plants in the form of a liquid. Gums have the following properties:

• They are made up of polysaccharides or polysaccharide derivatives.
• They are water soluble or, at the very least, soften and swell when mixed with water. Alcohol and other organic solvents, on the other hand, make them insoluble.
• They decompose completely without melting when heated and are prone to becoming charred.
• The majority of gums come from plants in the form of a liquid. When they come into contact with air, they dry out into translucent, amorphous, tear-shaped bodies or flakes.

Gum-resins are a combination of gums and resins that have properties from both groups. They have traces of essential oils in them. These are typically derived from plants that grow in dry and arid environments.

Acacia gum, also known as gum Arabic, is a low-viscosity soluble fibre exudate obtained from the trunk and branches of Acacia Senegal and Acacia Seyal trees. Gum production is a tree's defence mechanism against insects and moulds, as well as a wound-healing mechanism. Gum can be found in arid regions (areas) throughout the Sub-Saharan African region, from Senegal to East Africa, and beyond to Pakistan and India. Acacia gum is non-gelling and has a low viscosity. Acacia gum is soluble in cold and hot water up to about 50–55 percent concentrations, but not in alcohol. Acacia gum enlarges in water to form a jelly-like mass that does not dissolve unless left standing for a long time. When AG in powder form is heated above 100 °C, and especially at 170 °C, it swells up to a large extent but does not dissolve, resulting in a non-sticky gel (Sanchez, Renard, Robert, Schmitt, & Lefebvre, 2002).

Acacia gum is the most ancient and well-known of all natural gums. Acacia gum has been used as a food and an ingredient in adhesive and bone technologies since the Stone Age. Painting, ink preparation, watercolors, and dyes were all done with it. It was also used as a pigment binder and adhesive in paints for hieroglyphics and ancient inscriptions, as well as a binder in cosmetics and inks, and as an adhering agent in flaxen wrappings for embalming mummies. Because of its unique properties, such as high solubility, acacia gum is widely used as a stabilizer, emulsifier, flavoring agent, thickener, or surface-finishing agent among natural gums (Sanchez, Renard, Robert, Schmitt, & Lefebvre, 2002).

Moringa gum is obtained from the plant Moringa Oleifera Lam belonging to the family Moringaceae. The common and regional names of the plant are ‘drumstick tree,’ ‘horse plant radish tree,’ and ‘kelor tree’. A tropical climate is ideal for the growth of this plant and is found widely near the coast of rivers. It thrives competently in the hot and humid climate and is unaffected by environmental hazards such as droughts. The collection of the Moringa gum is done in the form of exudation from the injured region of the stem.

Upon collection, the exudate appears to be white; however, on exposure to sunlight, it gradually becomes reddish-brown or brownish-black. Moringa gum and its derivatives possess potential applications in diverse fields, including drug delivery, as a binding agent, as a pharmaceutical excipient, and as an absorbent for wastewater treatment (Treinyte, Bridziuviene, Fataraite, Rainosalo, Rajan, Cesoniene & Grazuleviciene, 2018).

Guggul is made up of oleo-gum resin, which is obtained by tapping the stem and branches of Commiphora wightii. The guggul tree is a plant that can be found in arid areas of India, Bangladesh, and Pakistan. It's a small, bushy tree with thorny branches that secretes a yellowish gum resin (guggul) through small ducts in its bark. Making an incision in the bark allows the trees to be tapped. Before being collected, the resin that flows out is allowed to harden. During each collection season, a guggul tree produces between 250 and 500 g of dry resin. Guggul is a viscid, golden-colored mass with an aromatic odour and bitter astringent taste that

Guggul gum is a light, vicious, and moist gum. It does not dissolve in water. Petroleum ether, ethyl acetate, castor oil, drying oils, and turpentine are all soluble in it. Incense, lacquers, varnishes, and ointments, as well as a fixative in perfumes and medicine, are all made with gum guggul (Gum Guggul, 2005).