The swelling test of the composite was performed to analyze the water absorption. The composite of dimensions 1x1 cm2 was cut and immersed in 4 different solutions which were 15% NaCl, and PBS (Phosphate Buffer Solution) at both acidic and basic pH, i.e., 4.27 and 8.08 and Tap water. The composites were cut small so that they can be easily be held by a tweezer and put inside the 50 ml centrifuge tubes which contained the respective solutions. A small piece of each composite was weighed and immersed in different aforesaid chemical media for a specified period of 12 days at room temperature.

The aim was to analyze the adsorption capacity of the composite. For this purpose, initially, the samples were weighed and noted. The samples were then kept under UV radiation (sanitization) to remove any germs and bacteria on the sample before submerging them into solutions. In brief, 10 ml of each solution was put in 4 centrifuge tubes, followed by immersion of one sample of each solution. The sample was then removed every 3 days for up to 12 days. The samples were removed and dried using a blotting paper to remove the excess water content over it. After drying the samples were weighed to four decimals and a difference between the initial and final weight was calculated. The said test was performed in duplicates and the data are represented with their respective standard deviation. 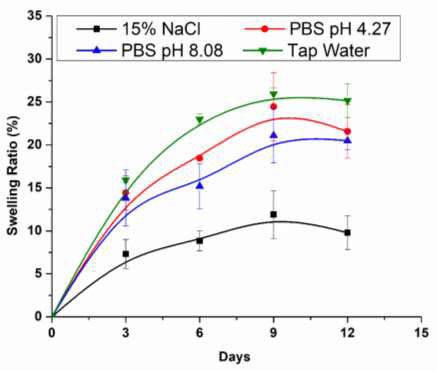 Fig. 30 Graph of Swelling ratio vs Number of days

To check the degradation rate of the composite, the Escherichia coli (E.Coli) bacteria was utilized. For this purpose, the E.Coli was grown for 12 hours in the presence of the samples in Nutrient Broth media. Bacteria grown without samples were considered as control samples. Two distinct studies were performed to analyze the biodegradation in the presence of the samples. First, the OD600 values were recorded using a spectrophotometer, and the differences between the weight after respective time intervals.

In brief, Escherichia coli (E. coli) bacteria were grown and were diluted to 0.1 OD600 i.e., an approximate concentration of 1X107 CFU/mL. The dry weight of the samples was recorded. The sample were UV sterilized prior to the incubation in solutions. Fresh nutrient broth of 10 ml was taken in 2 centrifuge tubes. Then 10% inoculum of 0.1 OD bacteria was given in both the tubes of control and the experimental centrifuge tubes. After every 3 hours, the sample weight and OD of the media and control were recorded to affirm the biodegradation of the samples.

All the experiments were performed in duplicates and are given their respective standard deviation values. 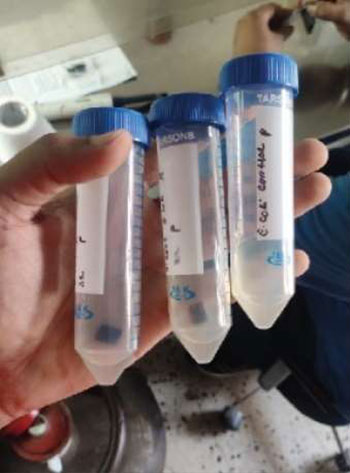 Fig. 31 Centrifuge tubes containing samples with bacteria and without bacteria

Degradation rate (k) was calculated using the above formula 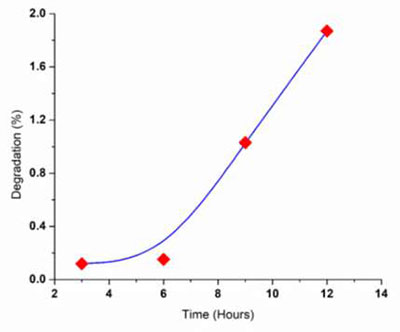 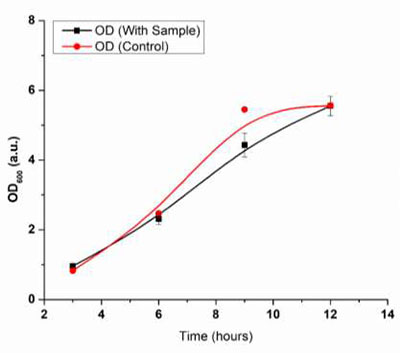 Fig (32) shows an increase in the degradation % with time. In the OD600 values, it was observed that the controlled growth (bacteria without samples) showed higher growth than that of those grown in the presence of samples. However, the control samples showed a saturation state (no further growth) within 9 hours, probably due to the consumption of all the nutrients within the media. Bacteria grown in the presence of samples showed slow but continuous growth even after 9 hours indicating the usage of the samples as a carbon source after the consumption of all the nutrients. This indicates the bio- degradation nature of the samples.

In addition to the OD600 values, the respective weight loss in the samples was also recorded. At every hour, a difference in the weights was observed. The degradation rate was calculated using equation (1). The T50 half-life was calculated using equation (2). The degradation rate was found to be k= 0.00123, and the half-life was found to be 3.36 weeks in the presence of media, indicating the significant bio-degradation of the samples.

A TGA thermal curve is displayed from left to right. The descending TGA thermal curve indicates a weight loss occurred. A 15.44 mg sample of the composite was analyzed. Temperature Program = Heat from 20 °C to 150 °C @ 10°C/minute in Argon atmosphere with a purge rate of 20 mL/minute. 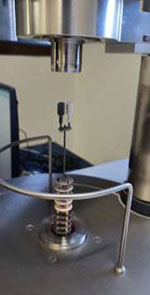 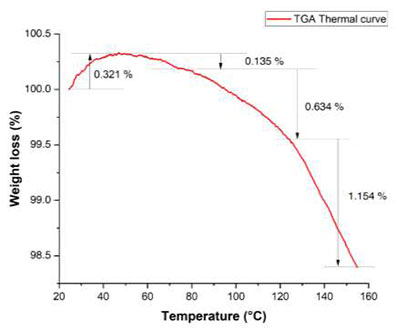 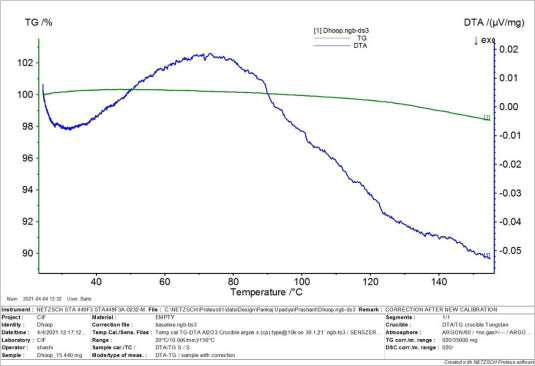 After observing the TGA and DTA curve under argon atmosphere, it is found that the material is stable at room temperature and at a specific temperature there will be an endothermic peak which occurs due to the removal of moisture.

The Charpy impact test which is also known to some as the Charpy V-notch test is a test for finding out the high strain rate. The method of testing is done by striking a standard specimen that is notched along with a controlled weight pendulum that is swung from a specific height. The impact test then aids in measuring the amount of energy that is absorbed by the specimen at the point when it fractures.

The impact testing system holds a Charpy V-notch specimen through parallel jaws. The maximum value of the pointer is set (300 J).

From its initial height, the hammer falls toward the sample.

The difference in the potential energies is the fracture energy.