The history of Bommalattam puppetry dates back to India’s medieval period as far as the 10th century when most of the Bommalattam performances were based on tales of spirituality and mythology. Bommalattam, narrates the traditional legends and myths such as Valli Kalyanam (Valli’s marriage), Harichandra, Lava Kusa, Nallatangal Kathai, and Markadeyan Kathai. Bommalattam was also used during the freedom struggle to promote nationalistic zeal. Bommalattam combines the techniques of both rod and string puppets. They are made of wood and the strings for manipulation are tied to an iron ring which the puppeteer wears like a crown on his head.

A few puppets have jointed arms and hands, which are manipulated by rods. The Bommalattam puppets are the largest, heaviest, and the most articulate of all traditional Indian marionettes. A puppet may be as big as 4.5 feet in height weighing about ten kilograms. Bommalattam theatre has elaborate preliminaries which are divided into four parts – Vinayak Puja, Komali, Amanattam, and Pusenkanattam. In Bommalattam puppetry, the puppets are made out of cloth, wood, leather, or other materials. The strings or wires are used to control the puppets, whose hands and legs were tied up to the strings. There are 5 to 8 members in the puppet show troupe. A single puppeteer presents the entire puppet show. The Bommalattam finger puppet dance begins with an homage to God and continues with humorous stories. There is a character of buffoon which is extremely hilarious that displays fun and frolic. 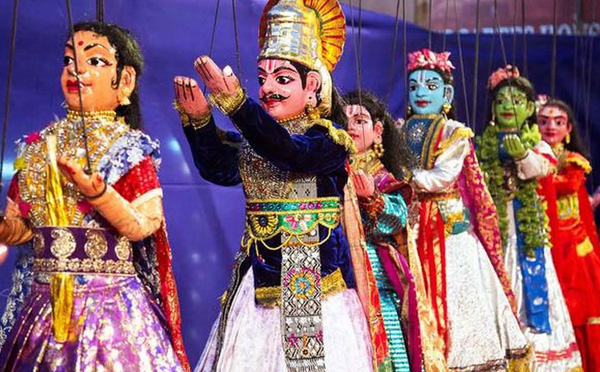