“Andhra Pradesh’s famous leather puppets are large in their make and made from translucent goatskin. The distinctive details are painted in bright colors, and perforations are later added to these striking puppets. Traditionally used as shadow puppets, the leather puppet theatre, or Tolu bommalata as it is locally called, was developed in the 16th century under the patronage of Vijayanagara rulers. A fine white cloth measuring 12x9 ft lit from the back with a bulb or oil lamp functions as a screen. Both sides of the puppet are painted by us to enhance the projection of the figure. The puppet is then inserted in between two bamboo splits for stiffness, and movement. They can range from 3 to 6 ft in size”.

“Tholu Bommalaata is generally practiced by a troupe whose members belong to the same family, with the art being passed down orally from one generation to the next. The artists have their own narrative explaining the origin of their art form, as is common in all oral traditions, and often trace their lineage back to a super-devotee mentioned in the scriptures. These legends, which differ in detail from region to region, stress the divine origin of the art form and grant divine status to the artists' ancestors”. 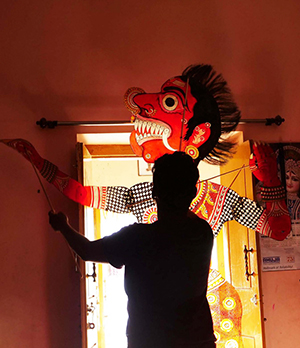