“Anupama Hoskere is a master puppeteer and the Founder-Director of the Dhaatu Puppet Theater, Bengaluru, India. She is the recipient of the prestigious Sangeet Natak Akademi Puraskar, the highest Indian recognition given to practicing artists. She has wide experience in every facet of the composite art form of puppetry including performance, puppet making, puppet theater proscenium design, scriptwriting for puppet plays, music and song composition for puppet plays, lighting, and sound effects in puppet theater”.

She has created to date, 14 one-hour-long puppet productions and 8 short puppet performances including several productions which include dance and puppetry combined in absolutely endearing proportions. A careful and detailed study of the Natyashastra provided Anupama much impetus to expand the intricacies and intellectual merit of her productions. Anupama received the Senior Research Fellowship from the Ministry of Culture which gave her an opportunity to redesign the old puppet theater into a more complex layered theater - combining dance, theater, and puppetry into one Broadway scale performance of about 80 minutes. The Dhaatu Puppet Theater has been invited to perform at prestigious International Festivals in France, Belgium, Morocco, the USA, and China apart from several platforms within India where Anupama Hoskere’s genius received its due recognition. Anupama is also the Festival Director of the Dhaatu International Puppet Festival – an annual festival In Bengaluru. Dhaatu has, over time, developed to become India’s first puppetry brand name that catapulted puppetry into being recognized as a respected and classical art form of India. 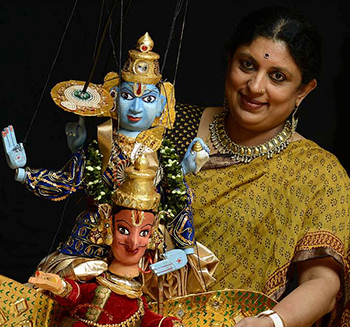