Dadi D. Pudumjee is one of India’s modern creative puppet artists and directors. Starting puppetry as a hobby in his hometown of Pune, India, he graduated in economics and later joined the NID-National Institute of Design in Ahmedabad, India, in the department of Visual Communication. In Ahmedabad, he joined the puppetry section run by the late Meher R. Contractor of the Darpana Academy of Performing Arts, where he developed his hobby of puppet theatre and made it his professional practice. In 1972 he attended the international world puppet festival in Charleville Mézières and also the UNIMA congress. This brought him into contact with many puppeteers and their art, a legacy that he carries forward to this day. In 1976 he received a UNIMA Sweden and Swedish Institute scholarship to be a guest student at the Marionette Theatre Institute in Stockholm, Sweden, under Michael Meschke. Whilst there, he also participated in a training workshop in Bunraku puppetry/manipulation under the guidance of master puppeteer Sennosuke Yoshida, from Osaka in Japan.

He is the Managing Trustee and Artistic Director of The Ishara Puppet Theatre Trust. He is also the President of Union Internationale de la Marionette (UNIMA) (World Puppet Organisation). In 1980, he set up the Sutradhar Puppet Theatre at the Shri Ram Centre for Art and Culture, New Delhi, India's first contemporary puppet theatre repertory company and was its Artistic Director till 1986. Dadi set up the Ishara Puppet Theatre, in 1986, which is one of India's leading modern puppet theatre groups, working with puppets, actors, and dancers, creating a style that is a synthesis between the East and the West. He was awarded by Sangeet Natak Academy, the National Award, for his work on puppetry. Besides directing performances for Ishara, Dadi conducts workshops on puppetry and allied arts for various agencies, schools, and institutions in India and abroad. 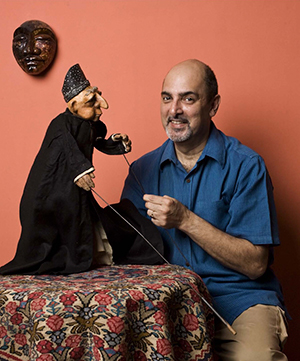