Margazhi means many things to many people. In this section, we shall focus on some important symbols and artefacts that come to one's mind when one thinks of Margazhi. This information is based on casual interviews conducted with people belonging to Chennai, Tamilnadu.

Kolam
Kolam is a well-known form of decoration practised by many south Indian households. It is a decorative pattern drawn on the thresholds of homes, made with rice flour or in recent times, chalk powder. 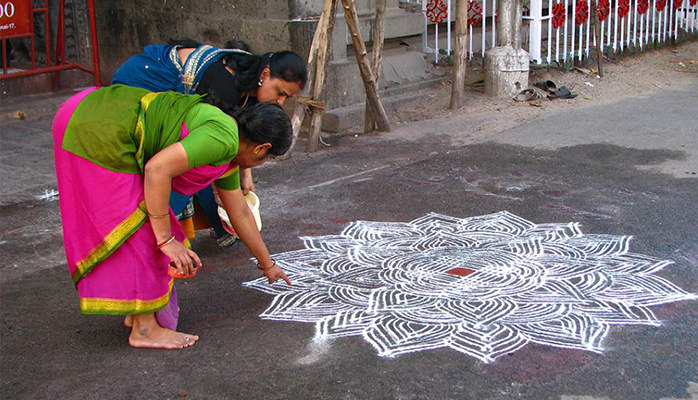 Women drawing kolam in front of the temple.
(Image source)

Although Kolam is drawn every day, it is emphasized more during Margazhi, and waking up before sunrise, bathing, cleaning out the area on the threshold and laying out the kolam is a part of the daily routine in the month of Margazhi. The women of the house, who mostly draw the kolam, try many different new patterns and sometimes even work together on bigger kolams. Kolams are not only limited to homes but are also drawn in temples and entrances of other buildings. Some kolams may even have colours and flowers as part of them. The “Margazhi Kolam” as people call it, has a small ball of cow dung in the middle with a pumpkin flower inserted in it. 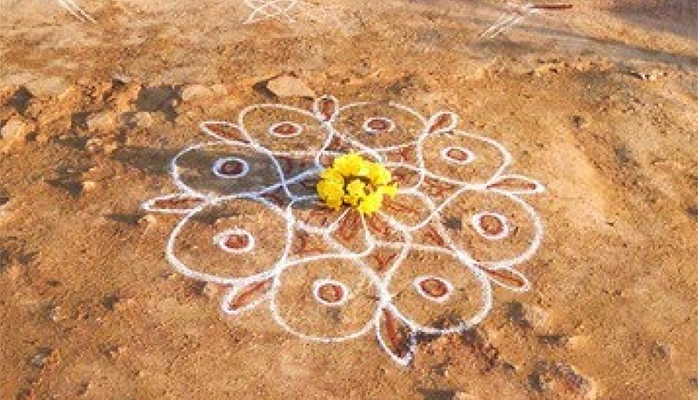 Andal Attire
Andal was discussed in brief in the previous section. In this section, some of the elements of her attire in which she is commonly depicted will be discussed. These artefacts and symbols appear more commonly during the month of Margazhi in Tamilnadu and surrounding regions.

Her Hairstyle
Andal has a distinctive hairdo in all of her depictions, which is a small bun, called “Kondai”, to the side of the braid. It is a recurring symbol representing Andal and is adorned by many south Indian brides, during their wedding ceremonies. The small bun is decorated with jewels, a couple of pearls hanging from the end and jasmine flowers. The idols worshipped in the temples are decorated with a headpiece, but some of the visual depictions of the goddess have a small bun of hair. 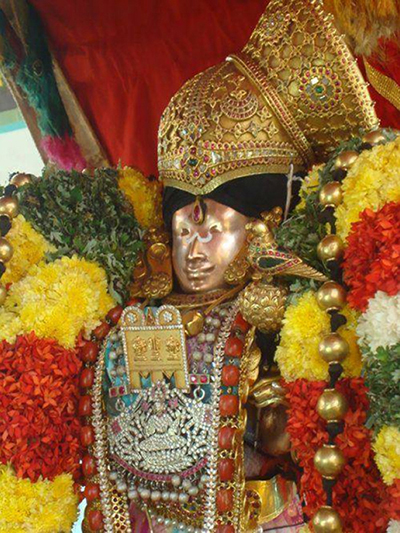 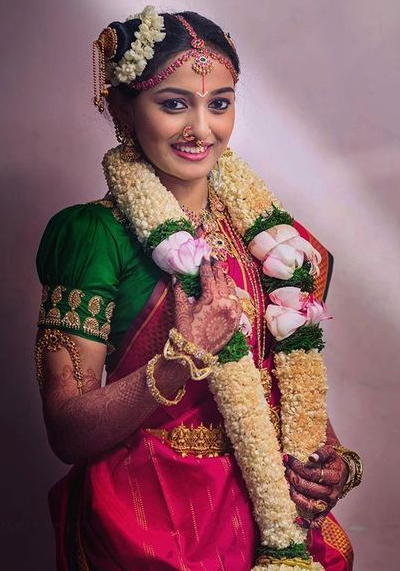 It is said that the marriage of Andal and Perumal was divine and hence, the brides are dressed up similarly indicating that their wedding is divine too.

Her Garland
Andal, who was initially known as “Kodhai”, made it clear that she yearns to be married to the Lord Perumal. She eventually started making garlands as offerings to the Lord, but only after she wore them first. She continued to do this until one day, she was found out by her father Periyalvar, who forbade her from repeating this, and a new garland was immediately made. Later in the night, it is said that Perumal appeared in Periyalvar’s dream, and said that he wanted only Andal’s offerings, and that is how Andal gets her name, which literally means “the one who ruled over the lord”. 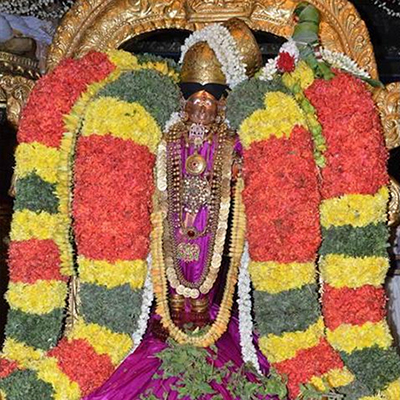 The tradition is still kept up in the Srivilliputtur temple, where the garland is first offered to the Andal idol, and then taken to the Venkateshwara temple in Tirupati and vice versa during the Brahmotsavam festival. The garland follows a distinct style and is made of tulsi (Holy Basil), Sevanthi (Yellow Chrysanthemum) and Sampangi (Champa) flowers.

Her Parrot
Andal, In Her ‘Nachiar Tirumozhi’, talks about her parrot and it is said that her singing about the parrot may refer to her sending parrots as messengers of love to Perumal. Parrots are also said to signify messengers of love, they are considered to be the vehicle of Kamadeva, the Hindu god of human love or desire. 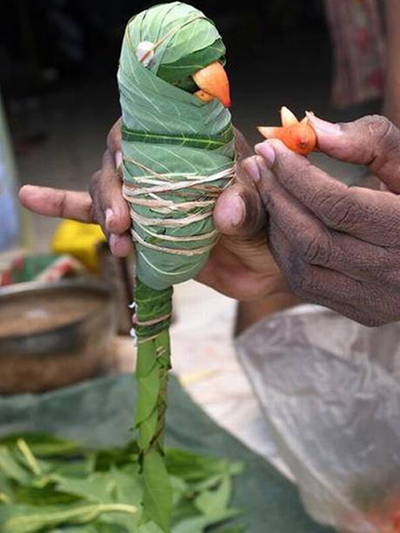 In the town of Srivilliputhur, Andal's parrot is hand-crafted, with fresh green leaves for its body, pomegranate flower for beak and mouth and Bamboo sticks for legs. An article published by The Hindu talks about S Raman, who is 65 years old and is the last man left in the community of parrot makers, which spanned seven generations in that town. He single-handedly collects all the materials required and creates the parrot in four hours every day. (Krishnamachari, 2013) 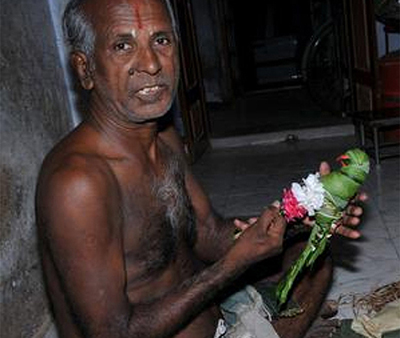 Sweet Pongal Prasadam in Leaf Cups
Margazhi means many things to many people. One thing that everyone commonly enjoys is the “Chakkarai Pongal Prasadam” which is the sweet dish that is offered to the deities first and distributed to temple visitors. Although Prasadam is given on many other occasions, it's given consecutively every day in the early mornings when people visit their local temples. A very common sight is a long queue of people waiting inside the temples for fresh Prasadam in those little lotus leaf cups.

Prasadam is given to every single person who visits the temple and it reflects the philanthropic spirit of temples, which regularly feed those in need of food. These recipes are also passed down generations and are cherished by everyone who has tasted it. The process is also sustainable as the food is never wasted, and it's served in biodegradable leaf cups, which everyone knows and loves. 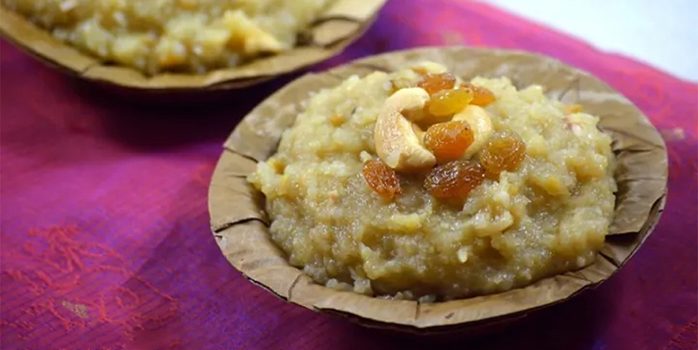 Swarga Vasal
Vaikunta Ekadashi, as discussed in the previous section, marks the end of the Margazhi season. This day is when the doors to “Vaikuntam” (the heavenly abode of Vishnu) are considered to be wide open for everyone. The presiding deities (a form of Vishnu) of the temples are brought outside in the early morning, passing through the opened doors.

This is an important event in the Ranganathaswamy temple in Srirangam, Tamilnadu, which has a dedicated “Swarga Vasal” which is opened only once a year. People observe a fast on this day, visit temples and walk through this gate and this is considered as them entering the doors to Vaikuntam. Therefore, these opened doors are a common symbol that marks the end of the Margazhi season. 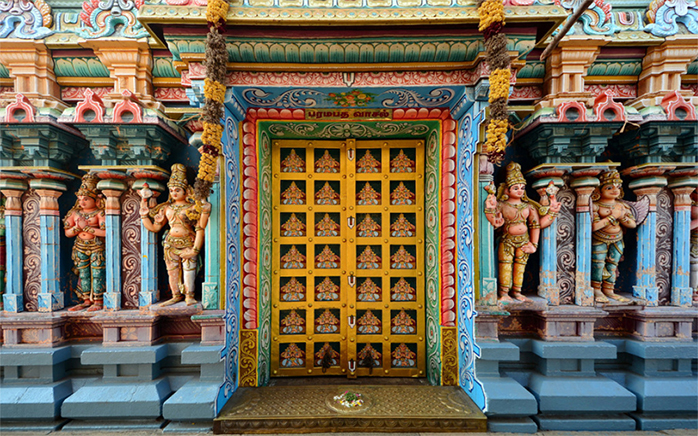 To some people, it signifies the start of a brand new year, and as they pass through the doorway they hope their sins are forgiven and are allowed to start the year afresh. 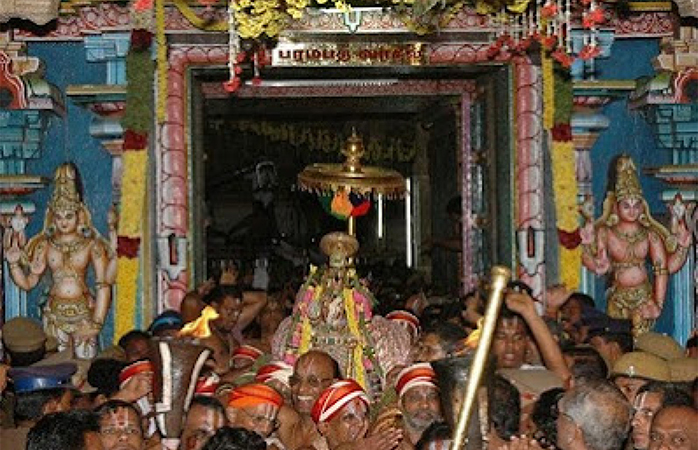