Madras Music Festival
Every year, Chennai city organises a two-month Music Season, said to be among the largest music festival in the world, with audiences and artists from across India participating in more than 1,500 performances spread all over the city's public spaces. (UNESCO Creative Cities Network, 2017). Many key music organizations called “Sabha”s in the city organize events of their own, but the most notable is the “Margazhi festival” by The Music Academy. The festival was founded in 1928 and the Academy has been hosting it since then, uninterruptedly, even during World War II and the 2004 tsunami (Shekar, 2020). 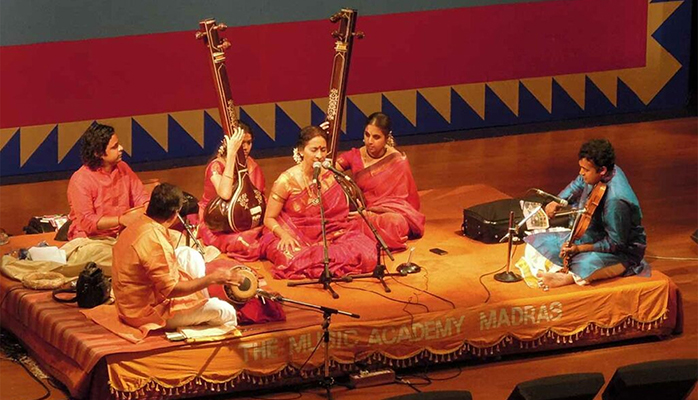 Singer Bombay Jayashri at the Music Academy during the fest.
(Image source) 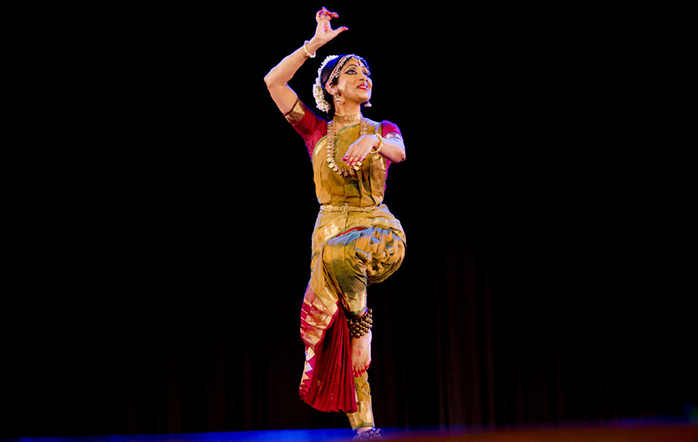 Performance at the Music Academy during the festival.
(Image source)

As important as the events themselves are the food served at “Sabha canteens” during the concerts. Some of the best caterers in the region are stationed outside these Sabhas and once the concert is over, people rush outside to get their hands on the piping hot delicacies from famous Tamil-Brahmin cuisine. These experiences in Sabha canteens were very commonly mentioned as the “most memorable” parts of the festival by most of the people interviewed. It is also said that the Margazhi festival may have begun not just to celebrate culture but also as political weapons, to revolt against British imperialism. This was an effort to “mobilize irreverence towards the then reigning crown”. (Ramanathan, 2016) 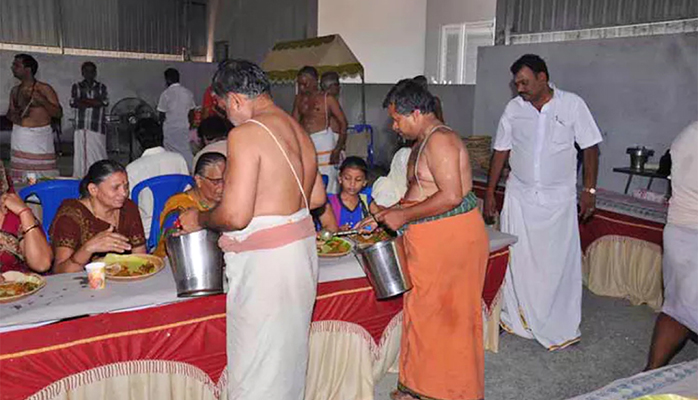 Veedhi Bhajana
“Veedhi Bhajana” literally translates into “singing devotional songs on the street”, which is essentially what this tradition is. People wake up in the early morning and in their traditional attire, playing tunes on their classical instruments like the Tambura and Manjira, singing devotional songs and famous Tamil compositions. They walk barefoot around the streets of their local temple even in cold temperatures. This is a regular Margazhi tradition and Veedhi bhajan groups have emerged and regularly perform for the locality. 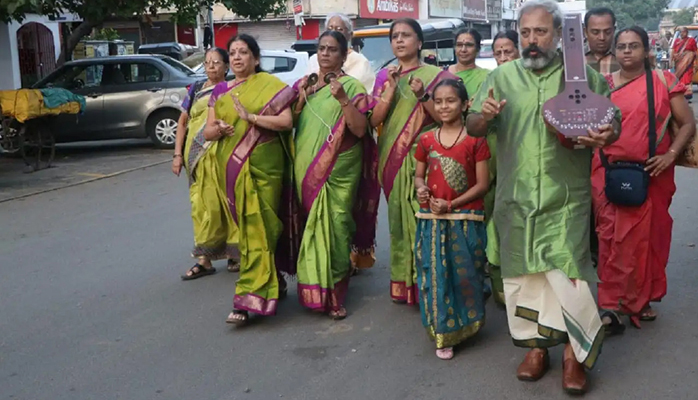 Kathakalakshepam
The art of classical storytelling, “Kathakalakshepam”, means “narrating the stories of ancient text in a comprehensive manner to the common people.” The storyteller is highly competent in ancient stories, Hari Kathas (stories of Vishnu), epics and other forms of classic literature and they narrate, sing and enact these stories to the audience. The storyteller is trained in classical music too and includes music in their stories. They usually perform in troupes with percussionists and other instrumentalists and the storyteller breaks away into song, followed by the instrumentalists who are masters of improvisation. (Swaminathan, 2016). These events are cherished by the older members of the city as this is a place where they can experience the stories they may or may not know in a more engaging manner accompanied by Carnatic music that pleases the soul. 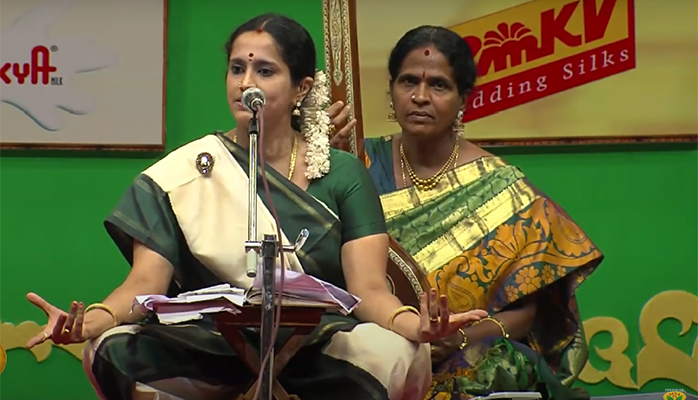 Mylapore Festival
As one would guess, during this festive season, many stalls, shops, canteens selling South Indian cuisine, and many cinema and concert venues displaying cultural content emerge. It is more than just a cultural event at this point, as this is the flagship event of many Sabhas in the city. One of the other important events is the “Mylapore festival” organized every year by Sundaram Finance, an investment service provider, based in Chennai. It is held in Mylapore, the cultural hub of Chennai city. This is a full-fledged fest involving contests, stalls, concerts held in unexpected venues like parks or on the street and talks. Visiting this festival has almost become part of the Margazhi tradition for many people in the city. 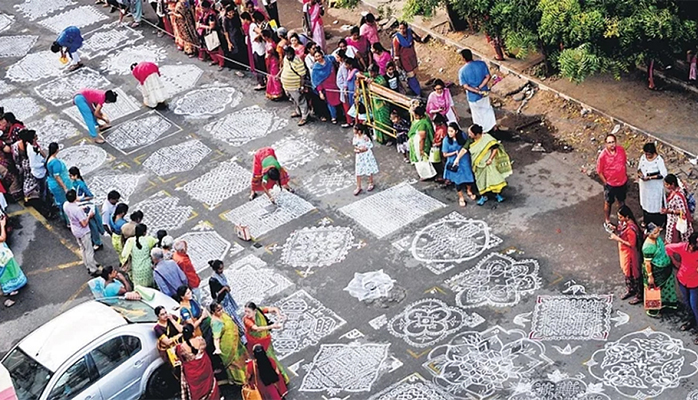 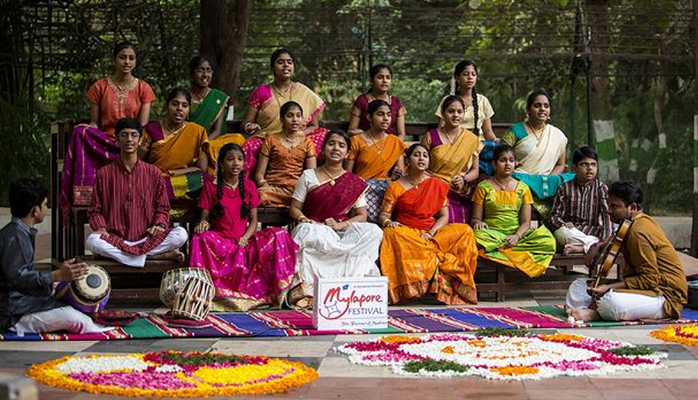 A significant event is the Kolam competition, for which an entire street is cordoned off, and over a hundred people design kolams within an hour or two. The kolams are left for others to spectate. Traditional games and Thanjavur painting workshops for kids are also some interesting options for the younger audiences (Surendran, 2020).

Newest additions to the celebration

People always find new ways to celebrate festivals, and the festival itself, and what it means to the people evolve over time. One thing that remains is how it brings people together and helps them connect to their roots and spiritual side. In recent times there has been a rise in folk music and dance events, which is also an effort to revive dying folk art forms. An example is the “Margazhiyil Makkalisai”, a festival that offers a platform for folk and street musicians and is an attempt to make Margazhi more inclusive. Art shows displaying all things “Margazhi”, mobile apps that help its users find concerts that happen around the city and a series of illustrations by Biswajit Balasubramaniam depicting people during the Margazhi season are just a few of the new additions to all the Margazhi festivities. 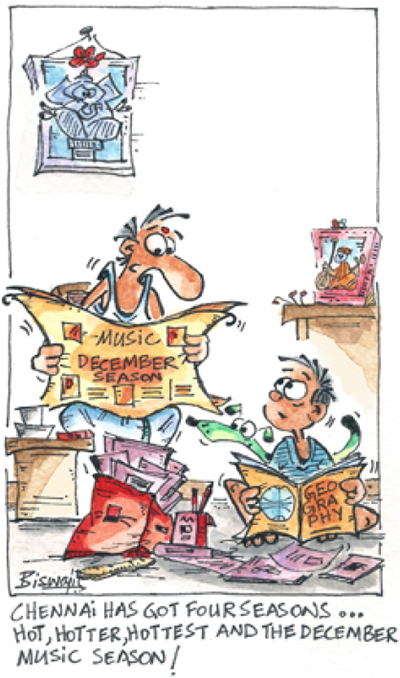 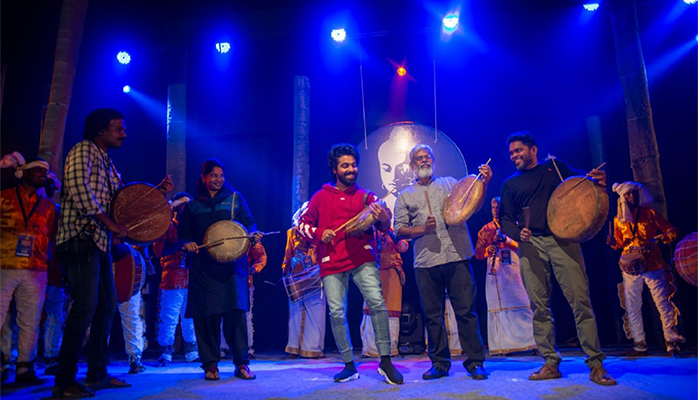 A day in Margazhi - An infographic

Based on all the information collected, an infographic summarizing the events and artefacts of Margazhi has been designed. It shows what a day in Margazhi typically looks like, from sunrise to sunset.
• The day would start off with a bath and designing beautiful Kolams in front of homes. Some visit temple tanks and take a cold water bath there. They then dress in traditional attire - a saree, madisar or dhoti and get ready for the day.

• Next on the list would be visiting a temple, and either participating or hearing a Veedhi Bhajanai procession. Having sweet Pongal Prasadam is something one will never miss out on when one goes to temples. Women would also do the required tasks and worship at their altar for their Pavai Nombu.

• Singing Thiruppavai and Thiruvempavai would happen either in the temple itself, or there would definitely be melodious Carnatic music playing on the radio or loudspeaker.

• The fun part of the day is here when the people visit fests and fun events in the city like the fancy-dress competition for kids, kolam contest, playing traditional games or maybe a bit of street shopping.

• Last but not least, the day ends with a soul-stirring Carnatic music concert (they are actually held throughout the day, but the late evening spots are reserved for the best artists), a visually enthralling dance or drama or some folk music performances, and to top it off, having the most delicious food at the Sabha canteen is the best way to finish off the day.

The infographic created was shown to the same people who were interviewed and was verified by them. 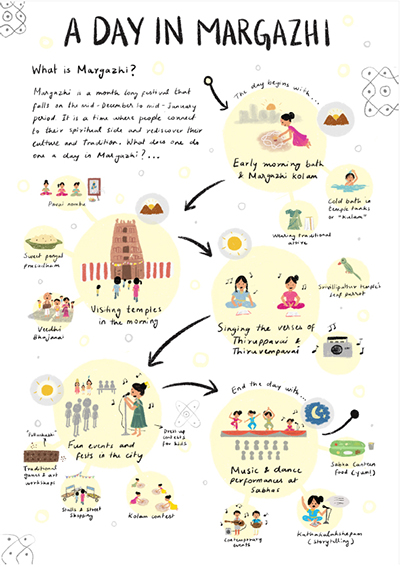 A day in Margazhi - an Infographic (pdf here).