Andal
Andal is a female poet and saint who lived in the 8th century. She was the only female out of the 12 Alvar saints of south India, who devoted themselves to the Hindu god Vishnu. She was found as a little child under a tulsi plant by Periyalvar, another Alvar saint, who adopted her. She undertook a religious vow of fasting (a 'Paavai Nombu') during the month of Margazhi and composed famous Tamil literary works Thiruppavaai and Nachiar Tirumozhi, which are recited avidly during the Margazhi season. Her love and devotion to Vishnu are very evident when one reads the verses of these literary treasures. Andal, her Pavaai Nombu and her literary works are central to the celebration of Margazhi. A temple dedicated to her is located in Srivilliputtur, Tamilnadu.

Thiruppavai and Nachiar Thirumozhi
The Thiruppavai is a set of 30 verses or “Pasurams” in praise of Vishnu, who is known as Perumal, and yearns to be united with him and wants to serve him eternally. In this work, she also talks about the vow she undertakes and says that it can bring happiness and eternal bliss. (Mohanlal, 2011) The Nachiar Thirumozhi, which literally translates to “Sacred sayings of the Goddess”, is a set of 142 Pasurams divided into 14 segments, and each is called Tirumozhi. Similar to the Thiruppavai, this work of literature reveals Andal’s love and yearning for Perumal (Rajarajan, 2017). One verse of the Thiruppavai is sung every day in the regions that celebrate Margazhi as every verse of the literary work corresponds to one day of Margazhi. Both the Tiruppaval and Nachiar Thirumozhi are recited in front of the shrines kept in homes of people and in temples too, by the devotees. 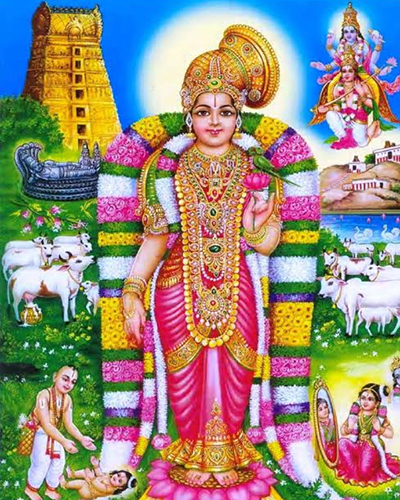 A depiction of Andal.
(Image source)

Thiruvempavai
Thiruvempavai is another important literary work in Tamil, and it is a part of Thiruvasagam, which is a compilation of hymns and was composed by the Nayanmar (Shaivite Bhakti poet) called Manickavasagar. This was composed in the temple town of Thiruvannamalai during the month of Margazhi, as the town folk celebrated the “Pavai Nombu” (a sacred vow), which was also undertaken by Andal. This was (and continues to be) observed by unmarried girls (called “Pavai”) who wished to unite with God as their husband.

Young girls and women still undertake this Nombu or sacred vow during the entire month of Margazhi and recite the 20 verses of the Thiruvempavai, one on every day of the month.

Other Literary Works
There is mention of the spiritual month Margazhi in many literary works of different languages and regions. Some of the most prominent ones are as follows:

• In the Bhagwat Gita, Krishna says “I manifest more in Margashirsha Maas among the different months in a year” to Arjuna.

• In the Skanda Purana, which is the largest of the eighteen Mahapuranas in Hinduism (Wisdom Library, 2020), the first chapter mentions the “greatness of the month of Margasirsha”.

• The legend of Katyayani Vratham, the vow taken up by Andal to attain Perumal, is described in the Bhagavata Purana. The “Gopis” who were young daughters of cowherd folk who lived in Gokula of Braja, prayed to Katyayani and took up the vow for the entire duration of Margashirsha to get Lord Krishna as their husband. They bathed in the Yamuna river at sunrise, observed fasts, made earthen idols of the goddess and offered her flowers and incense. (Sri Katyayani Vrata, 2010)